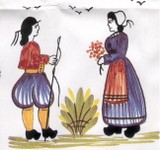 Normandy and Brittany are well known by faience earthenware. Henriot Quimper earthenware (Brittany) is making pottery since 1690. The piggy banks are traditionally painted with a male or female farmer in Breton’s costume. But other designs are now possible. They are still for sale. With the hallmark on the belly one can identify the age of the piggy bank. The length of the traditional Henriot pig is 20 cm and the number of the mould is 393. The mould is also used elsewhere, in Normandy for instance.

In 2016 I discovered a new type, a new moulded Henriot piggy bank in two sizes (see the pictures).

Eastern France
In Lorraine the cities of Lunéville, Sarreguemines and Saint-Clement are the original  centers of the earthenware industry. From 1812 on, and throughout the following century, it was the seat of Lunéville "Keller and Guerin" (Société KG). In 1922, the factories of Lunéville and St. Clement's were bought by Edouard Fenal, who also owned the factory in Badonviller. The Fenal family expanded their ‘empire’ in 1979 , buying Sarreguemines where since 1968 Lunéville pottery is produced with the name "KG Lunéville". In December 2006 the Fenal Group merges with the group "Faïence et Cristal de France consisting of the factories St. Clément, Niderviller, Vallerysthal and Portieux, all factories established in the 18th century with a prestigious past. This new group . "Terres d'Est" preserves the heritage, the ancient tradition, of Lorraine earthenware.