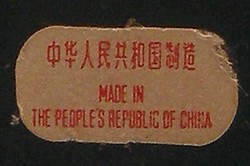 China
China has an ancient pottery and porcelain tradition. This also includes piggy banks. In my collection are specimens from the years 1948-1955 and recent ones from 2006. None of them have a hallmark, the oldest has a lable indicating the origin.

Indonesia
Trowulan is surrounded by an archaeological site of the capital city of the Majapahit Empire from the 14th to the 15th century. Excavations have found evidence of dense population during the 14th to 15th centuries. Terracotta figurines, amongst them piggy banks, were produced in large quantities. The Majapahit piggy banks (not for children!) were used to put coins in as offering to the gods. These very thin bronze Chinese coins were found during excavations in large numbers. I have serious doubt about the age of my 5 Majapahit piggy banks: I think they are copies.