×
Go to content
Pig Piggy Banks
Published by GD in Research · 28 September 2020
Sylvac: Fake, counterfeit or trade?
Shaw & Copestake Ltd, the manufacturer of the iconic black SylvaC piggy banks, ceased to exist in 1982. A management buyout did not last long. SylvaC had the mould numbers in the piggy banks. The higher the number, the younger the piggy bank. And when I say "piggy bank" I have to indicate that many other animal figures and other ceramic products were made, also numbered. Are the SylvaC products counterfeit? Yes. The question is whether that was before 1982 or afterwards. I lean towards the latter and assume that Shaw & Copestake Ltd's inventory has been sold, including the moulds. Incidentally, the plaster moulds were often broken when they were worn out and possibly also when the factory stopped existing. Be that as it may: I have 3 piggy banks that have all the features of their SylvaC "colleagues", albeit that the sizes are slightly different. A bit shorter and a bit lower, but that could be due to the clay used and the baking process (shrinkage). Two of those piggy banks are from Royal Norfolk China, Norwich and one is probably theirs too, but finished by Highland Arts - Scotland with the Scottish thistle. The 3 "counterfeits" do not have a mould number. So there is no question of counterfeit SylvaC or otherwise fake. Just trade ………… .. 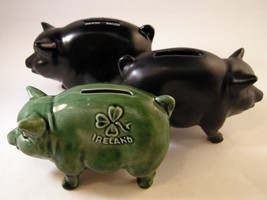 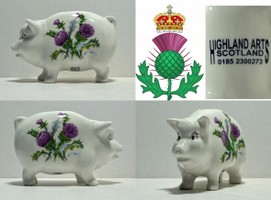 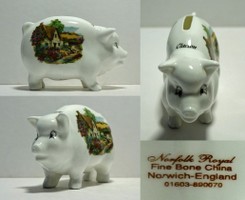 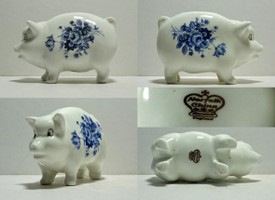 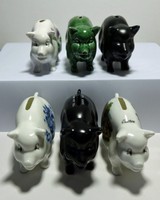