×
Go to content
Pig Piggy Banks
Published by GD in Provenance · 29 October 2019
I spotted a piggy bank on Marktplaats that apparently was attributed to Flora Gouda. I have a small series of these kind of banks and I have no idea where they are from. I assumed the Netherlands, but that is not specific to me. I contacted the seller and she had done some sort of comparative research. The signature of a number of Flora vases and saucers resembled the signature of her and mine piggy banks.
For one, even the colour red was the same, as far as you can see through photos. And as long as I don't know anything else I will identify this type as Flora Gouda for the time being.
Sometimes one have to believe that an educated guess is the right thing to do. So I go for Flora Gouda as identifier for some of my piggy’s. 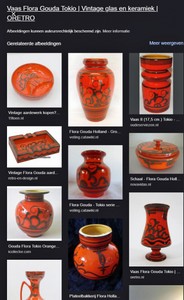