×
Go to content
All about pig piggy banks
There are more penny banks, coin banks, money banks than banks we Dutch call piggy banks in the shape of a pig. It is a bit odd therefore to state that the piggy bank in the shape of a pig is the one and only real bank. I would not dare say that!
The piggy bank in the shape of a pig looks very modest between the millions of coin banks, of which many are also mechanical. The words 'piggy bank' even are a label for banks in every shape. I my collection there are only banks in the shape of a pig.
I am a collector of old fashioned piggy banks in the shape of a pig, the banks that one has to smash to get the coins out. Metaphorically speaking, for there are more civilized ways of getting your money out.
Who I am? Gert Deelman, I am Dutch, live in The Netherlands and I collect banks (as I stated before all of them pigs!) since 1965 and after more than 55 years I think I have developed an expertise on the banks that I collect. My collection consists 1100+ original and unique piggy banks (shape of a pig!). More than 50 years ago I “fell in love” with piggy banks, I have no affection however with real pigs.
Not one of the 1100+ piggy banks has a plug ore hole in the belly/ bottom. As I mentioned before one has to smash it to get the coins out. I bought a lot of them myself in various places in Europe. The rest I bought via eBay, boot fairs, antique markets, charity shops and from collectors who stopped collecting.
Balloting
To be admitted to my collection a piggy bank must: 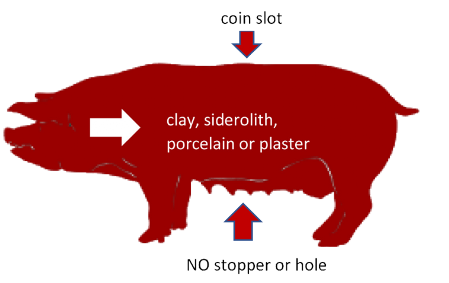 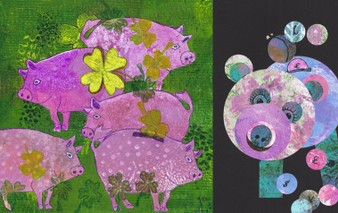 Why a pig as money box?
What's the link between a container in the pig shape and saving money? There are two main explanations:
In Western society, in earlier times, a pig was the poor man’s moneybox. Bought on the market in spring one could feed a piglet with the household leftovers during the year and the grown pig would be ready for the butcher just before the winter. It not only provided food for the owner and family, but could provide also to pay the doctor’s bill or the grocery store. As a bank in fact. Metaphorically speaking that is also the life-cycle of a piggy bank, to 'harvest' one has to smash it.
Another explanation is that the piggy bank got its name from orange clay called “pygg”. In the Middle Ages people used to store items in wide necked jars which were made of this clay. The label “pygg jar” was used even long after this pygg clay was no longer used.  The jars were originally used to store flour and beans but also money was kept in these jars. They acquired the label “pygg banks”, later piggy banks. This explains that in English speaking countries every money box is in fact a piggy bank, without the association of the (shape of the) pig.
This theory does not explain the origin of pig piggy banks in not English speaking countries. The piggy banks of Trowulan, Java (Majapihit) have their own history of why they are in the shape of a pig and exist since the 14th century. And the so called German "Billeben" pig piggy bank should be from the 13th century. Another theory states that piggy banks originated in China during the Qing dynasty. Since pigs symbolized wealth and abundance in Chinese culture, people crafted pig-shaped vessels to store their coins. 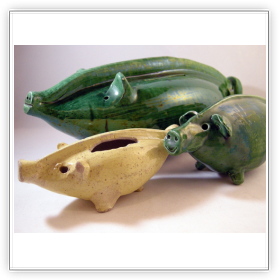 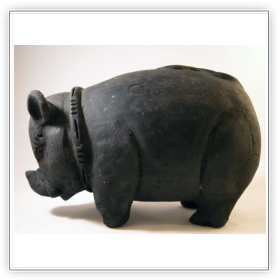 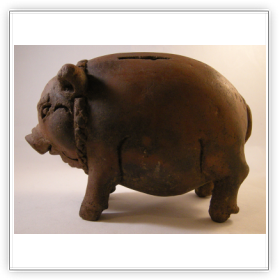 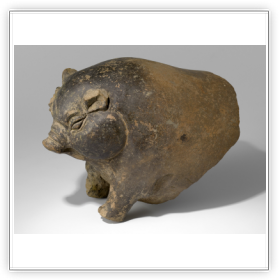 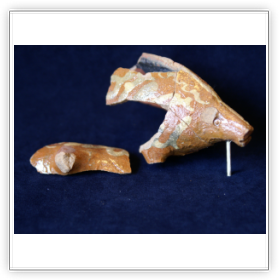 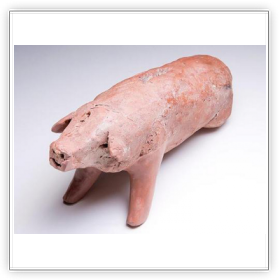 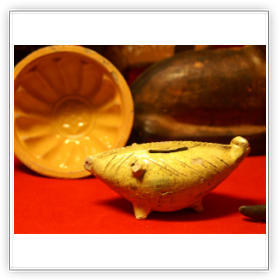 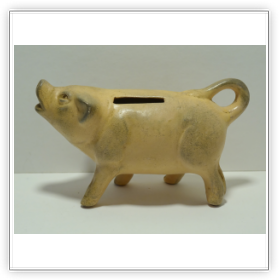 I prefer "the pig as the poor mans's money box" as the answer on the question "why a money box in the shape of a pig"?
Next question to answer: "Why has the pig (and therefore also the pig piggy bank) the luck factor?" See 'history' in 'information'.

Blog: backgrounds and more facts and items as "to restore or not", "buy or sell", etc.
Facebook:  read my PBP: Piggy Bank Page.
Instagram: My search for piggy's pedigree!
Buy one?

See my shop for original pig piggy banks.
However in the Dutch language.
Pictures (and prices) speak for themselves.

For a detailed overview of this website, click on the piggy bank. You will then receive a table of contents, without having to go through the entire MENU first. You can then decide for yourself how to scroll through the site.
Back to content